IE 5 has several deficiences which make it difficult to cater for when writing web applications. Two major ones are the broken box model and the broken font keyword system. IE 5.0 also lacks support for XMLHttpRequest [Update 2005-06-16: apparently it does support it; sorry about that].

IE 5.x is almost completely unsupported by Microsoft. As their lifecycle site outlines, IE 5.5 (SP2 only) is supported on Windows ME until the end of this year, and IE 5.01 is supported on Windows 2000 until 2010 – in both cases, only because it’s the version that OS shipped with. However, even Microsoft recommend in a footnote that you upgrade to get “improved security protection”. So anyone using IE 5.x is at a greater risk than they need to be.

The graph below is of browser market share, collected from the occasional press releases of OneStat, a web analytics company. There are several misleading things about this graph, due to the infrequency of samples – but let’s ignore all those and focus on the yellow and pink lines. These are the percentage market shares of IE 5.0 (yellow) and IE 5.5 (pink). 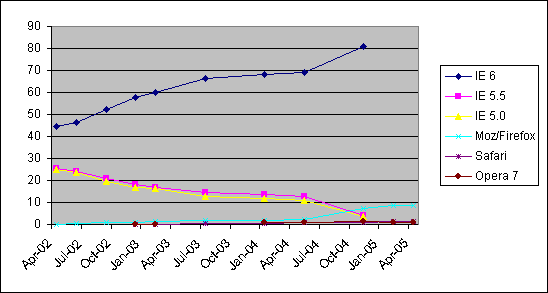 These three factors together mean that taking time to develop new web applications with IE 5 in mind, and to test them against it, is no longer worth the investment. The resources would be better spent testing in standards-compliant browsers such as Safari and Opera – where it’s much more likely to work first time anyway.

A few intrepid souls are leading the way, and politely requiring that their customers upgrade. I invite all web developers to consider joining them.