Some of you may have noticed that, after a long history of contests, there was no competition to predict the time of arrival of the 900,000th bug on bugzilla.mozilla.org. This was because we were preparing for the big 1M.

Now we are over 9000,00 (can that really be right?), I can reveal that the prize for the Millionth Bug Sweepstake will be the top-of-the-range Most Splendid Package from the Mozilla Gear Store, which includes a black hoodie, a drawstring tote bag, a Moleskine notebook, and a Rickshaw laptop bag, all Firefox or Mozilla-branded. 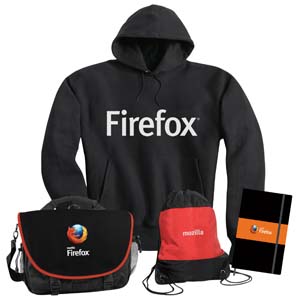 The aim of the contest is simple – you need your guess to be the closest to the actual filing date of the one millionth bug in our Bugzilla installation.

To enter, email me a plain text email at gerv@mozilla.org, ideally using this link, filling in the date and time you think the one millionth bug will be filed, along with your Bugzilla ID or email address. As the link suggests, your entry should be on the first line of your email, and formatted as follows:

All times are in ZST (‘Zilla Standard Time, a.k.a. Pacific Time, as displayed in Bugzilla timestamps unless you’ve changed a pref). If you prefer to be contacted on a different address, add that as well, in brackets on the end of the same line. We have ample graphs and charts (requires editbugs) to help you with your assessment. But if you can’t be bothered to do any research and analysis, just guess optimistically and hope!

This is a Mozilla community event. To keep it that way, entrants must have either a Bugzilla account on bugzilla.mozilla.org created before the end of July 2013, and which has done something useful in the past six months, or a Mozillians account vouched for before the same date. Anyone who meets those criteria can (and is encouraged to) enter, including Mozilla employees. Once the bug is filed, I’ll check those entries who are closest, and keep discarding them until I find one which meets these criteria. Therefore, there’s no point posting this to Slashdot or any other non-Mozilla-focussed news source. But please do post it in Mozilla news sources!

Badly-formatted entries may be discarded. The judge’s decision is final, and any funny business regarding the filing of bugs on or around the one million mark will be frowned upon. The closing date for entries is midday ZST on Thursday 5th September 2013.