Today, boys and girls, we are going to learn some tricks to writing good propaganda, using the following example, printed in the Independent newspaper on the 29th of June 2006: 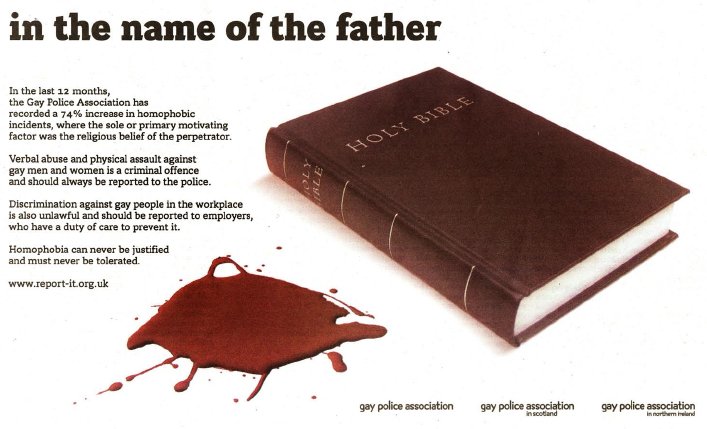 See how the example talks about a 74% increase in “homophobic incidents”, but then goes on to talk about “abuse” and “assault”, thereby subtly equating the two – whereas no definition of what constitutes a homophobic incident is actually given. The large blood stain in the picture also helps to lead the reader into believing that what has risen by 74% is the number of violent physical assaults.

The Gay Police Association exists to help gay people in the police service. They have no official role in collecting statistics about anything. However, the reader is not to know this – having them presented by an organisation with the word “Police Association” in the title gives the impression that these are official or government statistics.

One person’s homophobic incident is another person’s verbal expression of religious conviction. If you get to control the definitions, you can make the statistics much more impressive. If someone politely says they think that homosexual practice is morally wrong, you can easily class that as a “homophobic incident”. Also, a usefully wide definition of “religious belief” can include white supremacists and neo-Nazis, who often mix a bit of pseudo-religion with their hatred.

Make sure that your allies are “men and women”, whereas those you are attacking are “perpetrators” and “criminals”. (Even if they aren’t; see “Move The Goalposts”, above.)

Christians have historically complained less about propaganda denigrating their beliefs than Muslims, who have a tendency to get rather angry (remember those cartoons?). Hence the wise use of a Bible, and a Christian quotation for the headline, rather than a Quran, even though the advert talks about generic “religious belief”.

Using techniques like the above, you can lead your readers into thinking that there is an epidemic of Bible-wielding Christians violently assaulting gays while screaming verbal abuse, when in fact they’ve just discovered a few more elderly couples running Bed and Breakfasts who refuse to let a double room to two men in a civil partnership. Result!

[I should point out that Christianity teaches a) that any sexual practice outside of a marriage between a man and a woman is morally wrong, and b) that physical assault of anyone is equally wrong. For the hard of thinking: the purpose of this article is not to support assaults on gay people.]