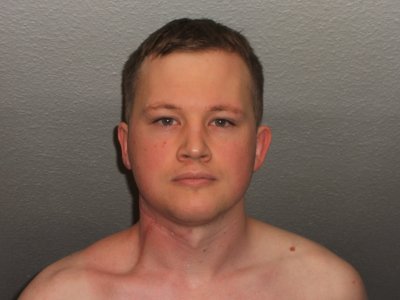 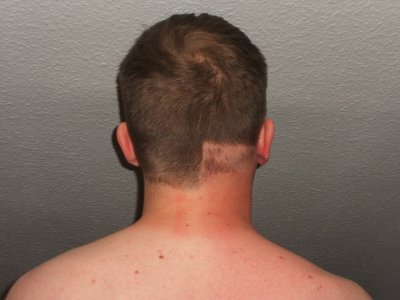 Two images today, for your viewing pleasure – as you can see, the rather precise nature of the beam has resulted in the hair on the back of my neck falling out in a very defined pattern. It’s also easier to see the skin redness on that photo, particularly on the lower half of my ear and the lower part of the back. (For some reason, more of my neck is red that I would expect.) I expect to lose the rest of the hair in that region (and on my chin on that side) in fairly short order; the question now is: do I shave the other side to match? :-)

I had a minor sore throat this week, which started on Monday but has, rather surprisingly, got a bit better as the week goes on. It’s rather odd having the sore throat feeling on the side rather than at the back! In theory, my windpipe is just outside the beam; perhaps I was lying wrong for a couple of days and the edge of it caught a dose. Still, something else to be thankful for.

I’ve realised that taking photos at the beginning of the week doesn’t give a particularly good understanding of what’s happening, because that’s the moment when the side effects are least, because things get better over the weekend. I should really be taking them on Friday afternoon. Oh, well. I’ve started this way so I’ll finish.

One thought on “Radiotherapy Week 4”