I’ve just upgraded my desktop and laptop to the latest beta of Ubuntu Hardy Heron, 8.04. Not wanting to sound like a broken record, but this process is still confusing for the average user. I was asked a number of questions that most people would have no idea of the answers to. 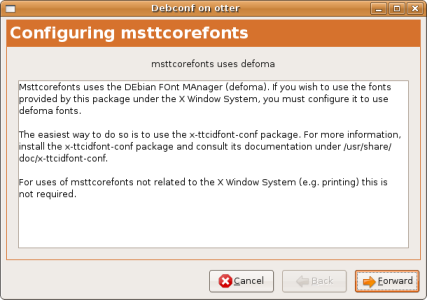 The first popup I got was the this top one:

What is a user supposed to make of that? There’s no “install x-ttcidfont-conf” button. Checking afterwards, it seems that the upgrade installs it anyway. So why bother telling me about it? Why not just do it?

The second popup told me it had to restart some services to use the new libSSL.

Then, I had a succession of five popups asking about replacing or keeping modified configuration files – smb.conf, bash_completion, cupsd.conf, ntp.conf and /etc/default/bluetooth. This bugs me for the following reasons:

Lastly, it asked me if I wanted to remove obsolete packages. If they are obsolete, remove them. If they aren’t, keep them. How am I supposed to know?

When I’d finished, Gimp no longer had the useful “Gutenprint” print capability. No idea why. The package had just gone. This was standard in the last release, I think – I certainly don’t remember installing it manually. I knew where to find it and reinstall it – but would an ordinary user know what was wrong?

The Ubuntu team needs to work on making packages which know how to merge in updates to their own configuration files – particularly updates made through the official configuration GUI for those packages.

9 thoughts on “Upgrading to Hardy”