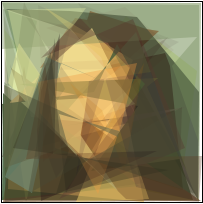 This implementation of simulated annealing is a very cool use of JavaScript and Canvas. My Mona Lisa is now 94.18% fit and very recognizable (see right).

The image under construction is labelled “Evolving”, and the original idea calls this “putting evolution to the test”. However, this isn’t actually evolution – at least, not as in the biological mechanism which (it is proposed) is responsible for the existence of humans. This mechanism indeed has some of the same features: a starting point, random changes, and a method of selecting some of those changes to be perpetuated. What it does not have, however, is a goal.

In the algorithm, you can compare where you’ve got to now with where you “ought” to be (100% – the real Mona Lisa). But in biological evolution, there is no “ought” – there is just “is”. The evolutionary journey has no signposts and no terminus. Evolution didn’t start with a picture of homo sapiens and, every time there was a mutation in an amoeba, ask “is this any closer?” This is, at best, a simulation of theistic, directed evolution (an unworkable compromise in my view, but that’s a matter for another time). Those who want to avoid what Steven Jay Gould famously called a “divine foot in the door” need to work a bit harder. ;-)

The questions the evolutionary mechanism might have (indirectly) asked are things like “Does this mutation make the animal survive better – reproduce faster or more often, get by on less food or be able to find more of it, etc.?” Things like this are the proposed selection algorithms. But if they are, we’ve ended up in a surprising place. Why is the result of millions of years of such pressures a dominant species which reproduces on average 2.4 times per pair in a 70-year life span, producing children which take an incredibly long time to become independent, has an odd tendency to monogamy, and can’t go without water for more than three days?

6 thoughts on ““Evolution” and the Mona Lisa”