We held a Service of Thanksgiving for Gerv on April 6th. Below are the order of service and videos of the speakers for anyone who was not able to be there in person, or would like to hear them again. 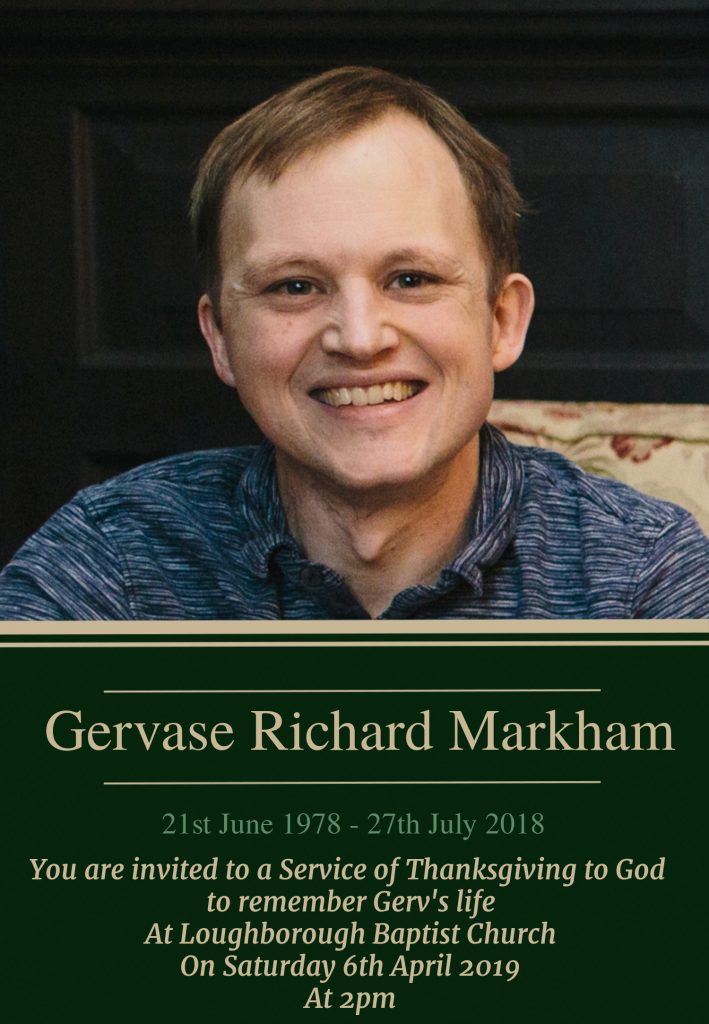 In my last computer upgrade, I went from a Lenovo X240 (screen resolution: 1366×768 on a 12.5″ display) to an X1 Carbon 4th Gen (screen resolution: 2560×1440 on a 14″ display). As it turns out, at its native resolution the Ubuntu Unity desktop on the X1 Carbon is simply too small to read. This wasn’t a problem until recently as I did most of my computing with an external monitor. But now I find getting up 2 flights of stairs difficult, I’m doing a lot more using the built-in panel, and experiencing this issue. Fortunately, X11 as shipped in Ubuntu 16.04 LTS has some sort of support for desktop scaling. Unfortunately, it’s a bit rudimentary. I use a scaling of 1.38, but still find that some dialogs look shonky and I have to do extra adjustment for some apps. But it’s just about workable.

I am considering an upgrade to Ubuntu 18.04 LTS where, famously, they have switched from Unity back to GNOME. GNOME does not support fractional scaling with X11 – you can only scale in whole numbers. It does do it with Wayland, experimentally, but Ubuntu decided (after giving it a go in the test releases) not to make Wayland the default for 18.04. I’d like to try this out, but the instructions I found online to do so don’t work with the LiveUSB version – so I’d have to take the plunge before being able to even try it.

So it seems I get the choice of 1x (everything too small) or 2x (everything too big). This is a significant loss of functionality; the X1 Carbon comes with screen options of 2560×1440 and 1920×1080, and it perversely makes me think I would have been better off getting the one with the lower resolution screen! As it is, using 2x gives an effective resolution of 1280×720, which is lower than the resolution of the X240 I used to use. The loss of vertical height is a particular pain point.

Can any reader of my blog suggest a way to solve or mitigate this problem? Is there a “compact” theme for GNOME that still looks like Unity? Are there ways of setting particular apps, like Firefox, Thunderbird or LibreOffice, to use less space or have a default zoom?

One fairly common need when someone dies is a coffin. There are various sorts on the market, from bamboo eco-coffins to embarrassingly-tasteless photo wraparounds to heavy walnut ones with carved panelling, which seems rather overkill for something which is to be observed once and then buried underground. I was discussing this with my father when he remembered that he actually has several sets of what are called coffin “blanks” stored away in a roof space. A coffin blank is basically an uncustomised coffin – the top and bottom are full size, waiting to be cut to fit, and the set includes the necessary extra pieces (sides and trim) to make it up.

When the local joiner in our home village retired 15+ years ago (and the jobs of joiner and undertaker were the same job for many centuries) he had several sets of blanks spare, and my father obtained these from him and stored them. They are made of elm, which is a traditional material for coffins but is now almost never used since Dutch Elm disease devastated the British population of elm trees in the 70s and 80s.

We found a joiner here in Loughborough with experience of making up coffins (although he says this is the first time he’s been commissioned to do one by the eventual occupant!). We had the blanks shipped to him, and I sent him my height and shoulder width. On Wednesday, we went to view the result. Elm is rather a “wibbly” wood, as can be seen from the first photo below, which means it’s relatively hard to work but also means it has lovely grains which come up beautifully when polished. Without further ado: 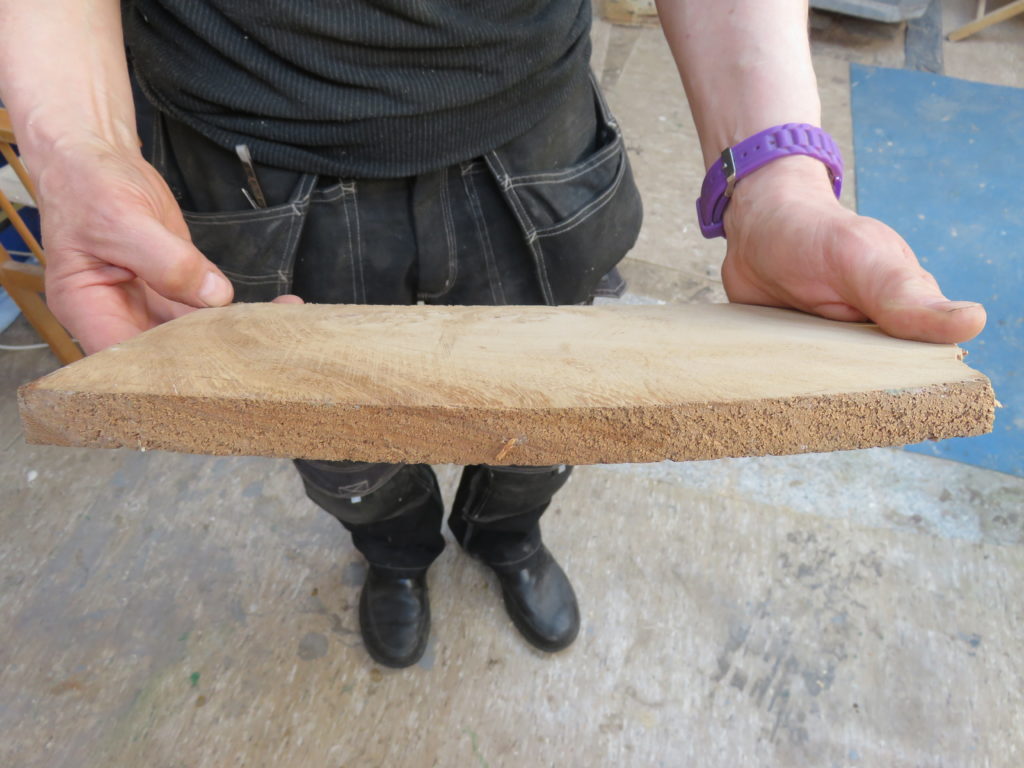 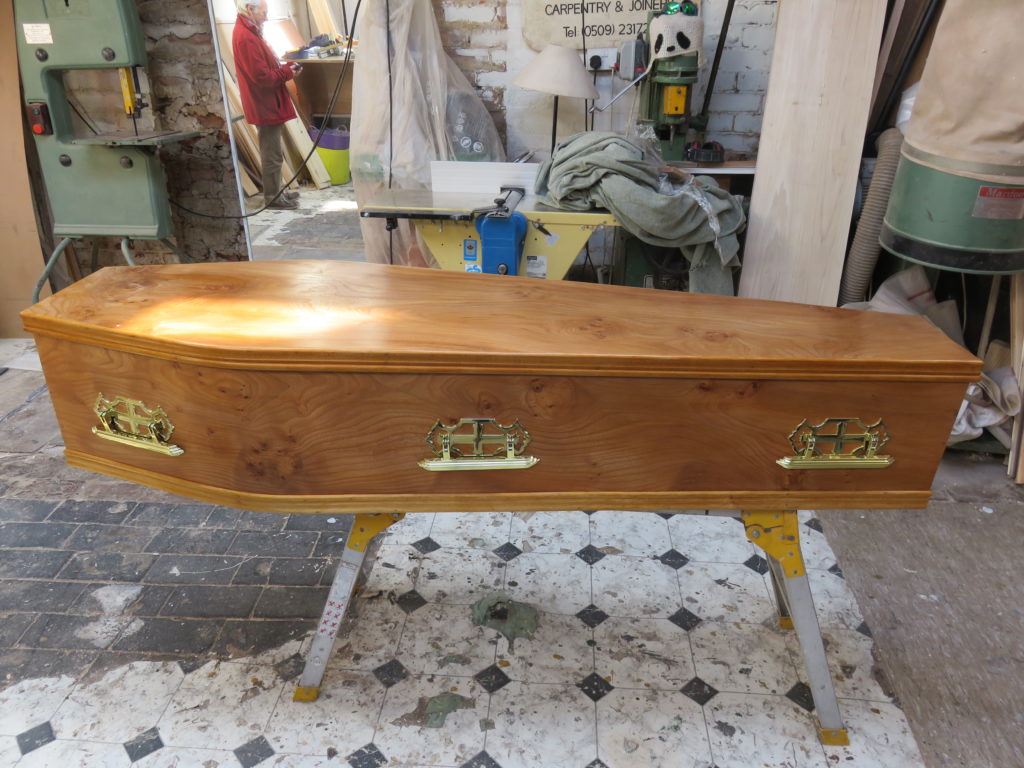 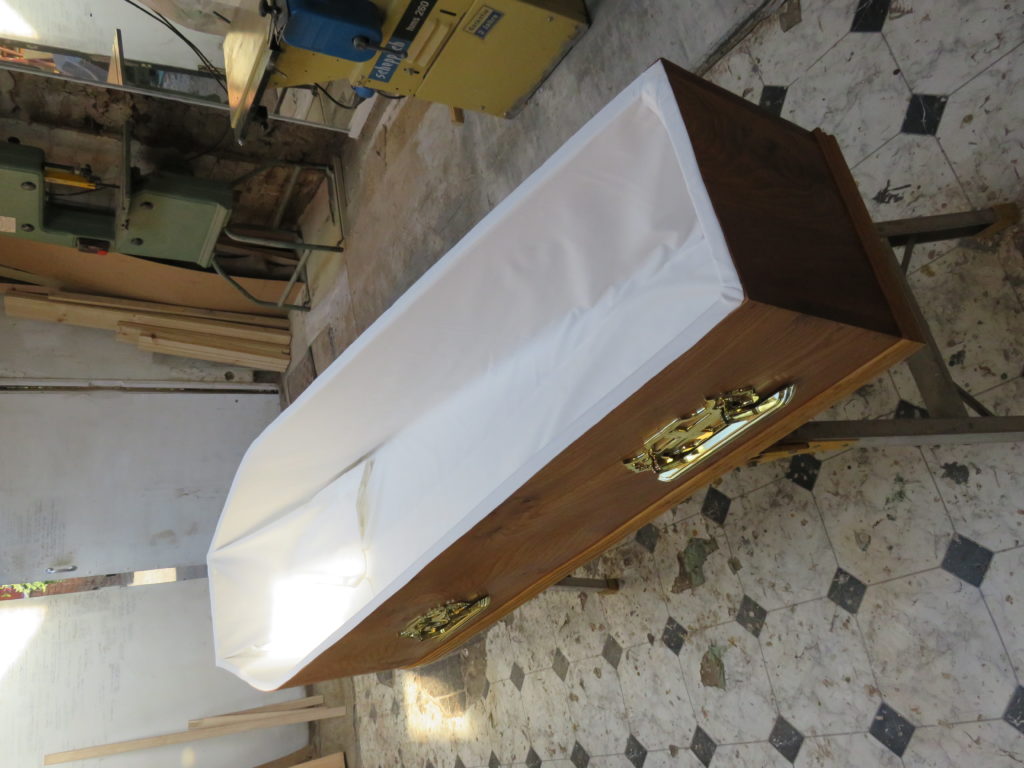 We’re very pleased with the results – it’s a lovely job.

In the past seven years or so I’ve got into creating decorated blown eggs, first with a traditional Ukranian wax-resist method called Pysanka, and later with an EggBot. It takes a few hours to do a pysanka so, since starting a family, finding enough time is difficult, but Easter is often both an appropriate moment and a period with enough space. Last year I taught William (then 5) and this year I’ve taught John (now 5). Here are the results from this weekend:

John’s is on the left, then William’s, then mine. I pencil out the designs on the eggs for them, in William’s case according to his specification, and then they try and follow them with the heated wax pen (called a kistka), with varying levels of dexterity and success. Still, even a shaky hand produces quite beautiful results, I think.

One thing which appeals to me about this art is that it produces artifacts which are both beautiful and very fragile – like human beings. Paul writes, using a similar analogy: “But we have this treasure in jars of clay to show that this all-surpassing power is from God and not from us.” The treasure is the gospel, and we are the jars of clay – weak vessels who can do nothing by themselves but can, with God’s help, nevertheless powerfully shine God’s light into the world.

Recently, I was reading a sermon on death by Charles Spurgeon, a noted 19th century London preacher, sent to me by a friend. I’ve not read much or any of his work before; he is certainly a man who can turn a phrase. His text was: “The last enemy to be destroyed is death“. As I increasingly bump into reminders of my own fragility and frailty, and know that my own encounter with it is not so far away, is was good to be reminded that for those with the hope of eternal life, our attitude to death is entirely transformed. The second verse of a famous Easter hymn, which I hope to have sung at my burial, sums it up well:

Lo, Jesus meets us,
Risen from the tomb;
Lovingly he greets us,
Scatters fear and gloom;
Let the Church with gladness
Hymns of triumph sing,
For her Lord now liveth,
Death hath lost its sting.

Thine be the glory,
Risen, conquering Son;
Endless is the victory
Thou o’er death hast won!

And since that memorable victory, every day Christ is overcoming death, for He gives His Spirit to His saints and having that Spirit within them they meet the last enemy without alarm. Often they confront him with songs. Perhaps more frequently they face him with calm countenance and fall asleep with peace. I will not fear you, death, why should I? You look like a dragon, but your sting is gone! Your teeth are broken, oh old lion, why should I fear you? I know you are no more able to destroy me, but you are sent as a messenger to conduct me to the golden gate wherein I shall enter and see my Saviour’s unveiled face forever!

Mozilla is 20 today. Most of what can be said about that has been ably said by others, some of whom have been involved for even longer than the 18 years I managed. Asa and I started at roughly the same time, but at least Mitchell, Myk and dmose have been around longer and are still involved. (Apologies if I’ve forgotten someone.)

As most of you know, I probably won’t be around to see much more of it, but (this will seem trite if it’s not to seem big-headed!) Mozilla is much more than one or even a few people. There will always be a Mozilla as long as there is an Internet and people who care about people on it. In that vein, let me also say that I’m absolutely delighted with the final outcome of the worldview project. The four items in the addendum to the Manifesto are admirable goals to aim for, and ones I endorse wholeheartedly.

Some of the time – when I climb stairs, or get into a coughing fit which takes 5 minutes to recover from, or can’t eat – it’s clear that I’m not well. But at the right time of day with the right pills, I can sit in a chair and chat to a friend and feel entirely normal. And so when my wife fetches me a drink from the kitchen, or someone else hastens to answer the door, I feel I want to say “No, please, I can do that for myself.” When I ordered a blue badge (a marker for your car allowing you to use disabled parking spaces), I felt that there must be many who are more deserving of one than I am.

But these feelings of wellness and fitness are really an illusion. Normality already includes having to deal with bouts of severe coughing, tiredness requiring multiple naps per day, back pain, and shortness of breath. And, while various symptoms have come and gone (I had oedema in my legs, then didn’t, and now do again but less strongly) the general trend is clear if you look dispassionately. The fact that I can have short periods where none of the symptoms are bothersome doesn’t mean they aren’t there. So why is my heart so keen to believe that the feelings of wellness are real?

As God would have it, we had a sermon today at The Crowded House, Loughborough (on Romans 3:27-31) which touched on this. The root of these desires is the sin of pride. I want to feel independent, in control, autonomous, competent, normal. That makes me feel good. But God has made us to be dependent beings – primarily on him but also on each other – and to find our contentment in him, not in our health or strength. And it seems he is teaching me to depend on him more, both by having to pray for the strength to make it through each day, but also having to graciously accept the fact that I am ever more dependent on others.

In a verse which has been important to me ever since I was diagnosed 18 years ago, God promises that in all things he will “work for the good of those who love him, who have been called according to his purpose” (Romans 8:28). In other words, I have cancer for my own good. Here is yet another way, the latest in a line of many, where God is demonstrating that he is using it to make me, slowly and sometimes painfully, more like Christ, for his glory.