Some people say that all Eurovision songs are the same. That’s probably not quite true, but there is perhaps a hint of truth in the suggestion that some themes tend to recur from year to year. Hence, I thought, Eurovision Bingo.

I wrote some code to analyse a directory full of lyrics, normally those from the previous year of the competition, and work out the frequency of occurrence of each word. It will then generate Bingo cards, with sets of words of different levels of commonness. You can then use them to play Bingo while watching this year’s competition (which is on Saturday).

There’s a Github repo, or if you want to go straight to pre-generated cards for this year, they are here. 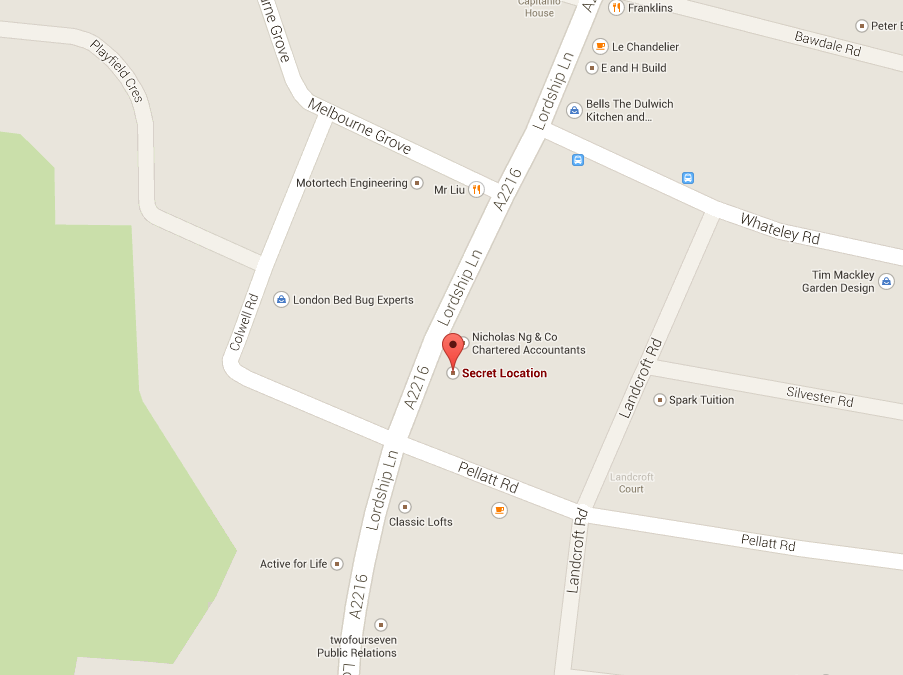 (Try searching Google Maps for “Secret Location”… there’s one in Norway, one in Toronto, and two in Vancouver!)

I got the following (presumably misdirected) email at licensing@mozilla.org:

If i go on several sites that shows adult videos for free on streaming it’s because i need to see that kind of things ! just don’t ask me why ! I don’t intend to hurt anybody I just want to get fed up to it ! As you know,i never download and i’ve been said it was free to see as long as you don’t share !
Please, let me see what i want ? I’m completely out of money

Jesus replied, ‘Very truly I tell you, everyone who sins is a slave to sin. Now a slave has no permanent place in the family, but a son belongs to it for ever. So if the Son sets you free, you will be free indeed.

Some filmmakers want to make an independent film about the USA’s most prolific serial killer, Kermit Gosnell, and the relative media silence about him. Over a 30-year career, he is suspected of killing 1000s of live, born, viable babies – which should horrify anyone who doesn’t believe in infanticide, whatever their stance on abortion. The filmmakers are trying to raise $2.1M, they need another $125k, and have only 5 days to find it. If you’d like to see this film made, please support them on Indiegogo, and spread the word.

The Naming of Hackers – a difficult matter,
It isn’t just one of your holiday games;
You may think at first I’m as mad as a hatter
When I tell you, a hacker has THREE DIFFERENT NAMES.

Today I received a very polite email from a citizen of a non-Western country asking that about:credits be updated to put the components of his and his colleagues names in the order customary in that country (family name first), while still sorting them by family name with the others. I use scripts to manage additions to about:credits, and the page is generated from a CSV file which contains fields for “family name” and “first/common/Christian name”. The system does indeed currently make some Western assumptions about the order of names, and so fulfilling his request requires changing it significantly.

Before I rewrite it, I want to make sure I rewrite it only once. I am aware of falsehoods programmers believe about names, and I’m glad that we don’t have to make a system which copes with every edge case. We are not planning to serve, for example, people without names or people whose names use non-Unicode characters. But we do want to serve people with one name, as I know of hackers in that category.

Here is my design. To test it: can anyone think of a hacker (on any project, not just Mozilla) whose name would not fit into this scheme?

The charset is Unicode. The sort is by base Latin letter. If a submission does not contain details of how they want their name to be sorted, I will make my best guess based on my knowledge of customs in their part of the world.

The other policies I have been implementing for about:credits (on which comments are also welcome) are:

Dr. Peter is one of our favorites. His book The Peter Principle: Why Things Always Go Wrong came out in 1969. He first expressed the principle that bears his name like this: “In a hierarchy, each employee tends to rise to his level of incompetence.” Once an employee reaches his level of incompetence, his superiors will recommend no further promotion, leading to “Peter’s Corollary”: “Every post tends to be occupied by an employee incompetent to execute its duties.”

How do you defeat the Peter Principle in your organization? How about this: as a condition of promotion, any employee agrees that they may decide to (or be asked to) return to their previous job, but keep the pay and benefits package from the higher-level job.

The idea here is to remove the financial disincentive for the employee to admit they aren’t doing well and say “OK, fair enough, this job isn’t for me; let me go back to what I’m good at”. If they are ever promoted again, their original salary or salary scale is used to determine their new pay, so they can’t yoyo up and down, collecting a compensation bump each time. One may want to impose a minimum term in the new job, and/or require management permission and agreement for the step-down. This would mean some lower-level employees cost the company more than others, but it might well be a whole lot cheaper than having the wrong person doing the wrong management job, badly. It could perhaps be seen as the price management agrees to pay for promoting the wrong person in the first place.

A remarkable entry from Merriam Webster’s dictionary (which I found linked from the Wikipedia article):

2 : behavior, conditions, or attitudes that foster stereotypes of social roles based on sex

The first definition has been in use for a long time, and is (I would suggest) widely recognized. But note the second one. According to Merriam Webster, any expressed positive view whatsoever, however limited, of any historically-recognised (a.k.a. ‘stereotypical’) gender-based social roles is, by definition, sexist.

Have I understood that correctly?

Spotted while browsing Pyongyang on OpenStreetMap:

My time machine is nearly here! Or is it here already?

Nokia Plan B led me to “In memoriam: Microsoft’s previous strategic mobile partners“. This got me thinking: can anyone name a company which fits the following criteria?

Or to put it another way: can anyone name a Microsoft partnership which turned out to be a good thing for the company concerned? (This is not a rhetorical question; I am not implying there have never been any.)

“Partnership” means working together on products, not just reselling Windows.

At FOSDEM, I was given a copy of “Confessions of a Public Speaker” by Scott Berkun (thanks, Josette!).

It’s an story-filled ramble through the life of someone who talks for a living. It was an entertaining read, although it could perhaps have done with more summarizing of the material, as when I reached the end I realised that I would have to re-read it if I wanted to make a list of things to change about my own speaking style and habits. But I was very pleased to see him call the Logitech Cordless Presenter, which I own[0], “the Cadillac of remote controls”. The man has good taste.

Oh, and there’s a story from me in the “You can’t do worse than this” section :-)

I visited a site linked from Slashdot today, which was an article (press release) about a new “open” mobile phone. The thing that amazed me was the small percentage of the initially-visible browser window devoted to actual useful content. 9.08%, by my calculations. And I have a 1280×1024 screen. 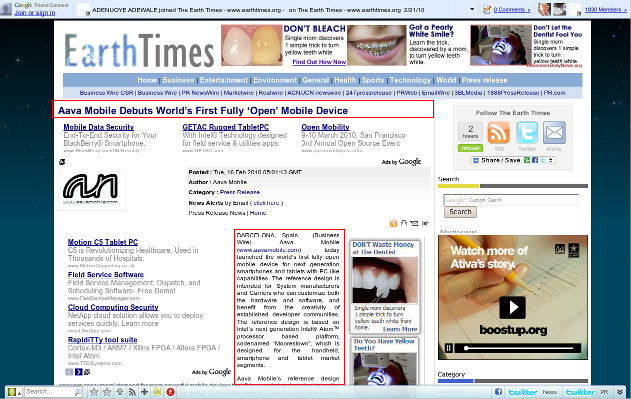 So I hereby inaugurate the 2010 “Content? What’s That?” Awards. Find a website page with as small a percentage of the page devoted to content as possible, post a screenshot on your blog with the content highlighted in red, as above, and the percentage calculated, and link to it here. Lowest percentage wins.

The most under-appreciated skill in the modern world is someone who can explain the complex in simple terms without trivializing it.

Anyone want to suggest other contenders for the title?

From a Google search inspired by an idea I got reading Scott Berkun’s Why panel sessions suck (and how to fix them):

Why has no-one commercialized this? It’s the obvious solution to the “pass the microphone” problem at panels, talks and other audience-participation events.