Earlier this week, I floated the idea of a Personal Audio Recorder, which would keep track of everything you heard. I suggested, and other people pointed out in the comments, that the interface was the key thing. You need to be able to search through your recorded life in an intuitive fashion.

Having thought about it, I think I’ve come up with an interface which is both easy to understand, and as simple as possible. <drumroll> May I present – the iEar! 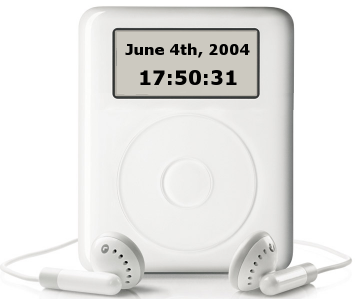 So where are all the buttons? Well, you don’t need any. While it’s switched on, it’s always recording, and the display shows the current time and date. If you want to review something it’s recorded in the past, you just start winding the wheel back. As you wind, the time and date on the display changes. When you stop winding, it starts playing from where you’ve got to, out of the built-in speaker (ignore the earphones; I couldn’t find a picture without them). Press the central button, and it resets itself to “now”.

But here’s the clever bit. The longer you keep winding, the faster it goes. So you can use the same winding action to take you back a minute, an hour, a day or a year. When you are close, stop and start again, and it’ll have slowed back down to a manageable pace. This way, you can easily zoom in on where you want to be.

This is how people would use the product anyway – they’d wind a bit, have a listen, wind some more, and so on. Once they found the key point where they had been told which pub they were meeting in, they’d listen for a few seconds and then press the reset button.

The mic may well be attached to your wrist, or some other location without too much clothing rustle, transmitting data back to the base unit via Bluetooth or some similar technology. That’s implementation detail.